This review previously appeared on GetApp.

I had used Goalscape in the past, and without a real need for it, felt it was mediocre at best. However, when I found myself in a crisis, under pressure to accomplish way more than most people can accomplish in a short time, I found myself returning to Goalscape instinctually. There is no other app out there that allows you to budget your time and set priorities in an easy to comprehend way under a time crunch like Goalscape does. However, that is only the BEGINNING of the story.

I happened to be trying to get the software at a time right when they re-vamped their entire website and business model to be cloud-based and subscription-based. I bought the software subscription, but, after trying everything within reason, could not download the app (as is expected when a new website launches in the first few hours). I went to bed and when I woke up, someone had already responded to my request for help and was on it for the entire day until we found a solution. He finally sent me an attachment file that downloaded the software perfectly. BUT, that’s not even where the story really begins either:

During the course of our conversation, I mentioned in passing that I had previously purchased a Goalscape Desktop license (which at the time had a promise of unlimited updates but no online service attached to it). The guy who helped me download the software tracked down that subscription, without my asking, found it under a different email address and transferred it to the new account I made all on his own innitiative. THEN, he told me that I was to be “grandfathered” into the system as a desktop user and that, while new customers must maintain a subscription to get software updates, I could cancel my subscription and keep my old user license with unlimited upgrades (which he so kindly attached to my new account). THEN, he offered WITHOUT MY ASKING, to refund my $99 dollar subscription fee if I wanted to cancel it and just get free desktop upgrades for life. So not only did this person (and the company as a whole) honor a promise they made to me and their other customers as a startup, but they were generous enough to refund me for my new subscription even though I never broached the issue myself! That is one incredible company! BUT IT DOESN’T STOP THERE!

Even after this, it came up in conversation that I only had one “user license” left from my old subscription. I told the person I had been working with that I had wiped the hard drive of my old computer and sold it. He took my word for it and MANUALLY added the second device license back into my account and explained that in the future, when I need to change machines, I need to uninstall Goalscape alone first to recover the license for use on another machine. So now I can use Goalscape with free upgrades for life FOREVER, even when I change machines. Now that’s customer service… I just want to say as an ending remark that I am very happy to know that there are people out there like those who work at Goalscape, so even if a copy-cat comes out with a duplicate one day, just know that these guys are incredible people and deserve your patronage. They are also working very hard to improve their product and will be coming out with major improvements in the near future, from what I have gathered. So get in on it before demand pushes their prices even higher! They have a great deal with a $99 yearly subscription.* That’s less than $10 dollars a month. Less than Netflix or Hulu Plus…

Pros: — Goalscape has incredible customer support and the staff will go above and beyond the call of duty to help you. — Goalscape is already an incredibly powerful tool for determining priorities, budgeting time or money, or just for brainstorming when you need a visual aid to help you think about the things in your life. — Goalscape can be useful to many people for personal projects as well as to collaborate with students or other people if you are a coach or social worker. And while roughly one hundred dollars seems like a lot at first, that’s less than ten dollars a month when you break it down. It’s affordable and you will get help when you need it, even if someone has to override system protocols to do it. — Goalscape is working on MAJOR improvements to their software, including allowing users to customize the field that represents what the percentages of circles mean, allowing users to color code or possibly even gradate colors of different pieces of the “pie” so that one can see multiple dimensions of their project (for example, size in the circle could represent time, while segment color gradated from white to red or green or any other color cold represent importance). The color palate may end up being able to even represent 4 or more dimensions to the project (i.e. the four psychologically basic colors: red, green, blue and yellow).

Cons: — Goalscape does not have the features I mentioned and it may take time for all the improvement to be implemented — Goalscape relies on Adobe Air and Flash as a way to be cross-platform and the is at the mercy of Adobe’s mistakes. HOWEVER, they ARE working on developing self contained apps for Mac OS X, Windows and possibly other formats. So keep an eye out for those improvements. 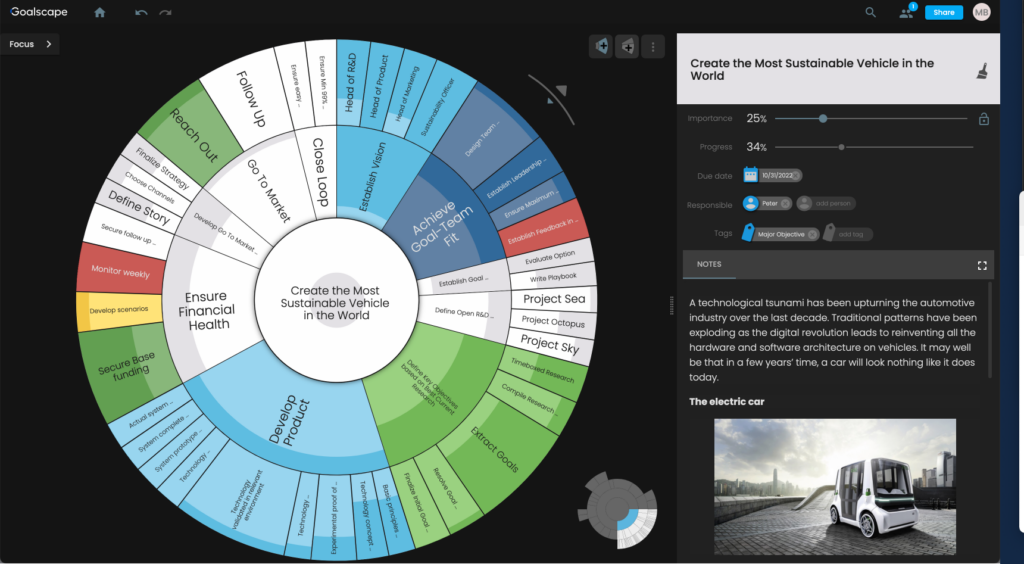 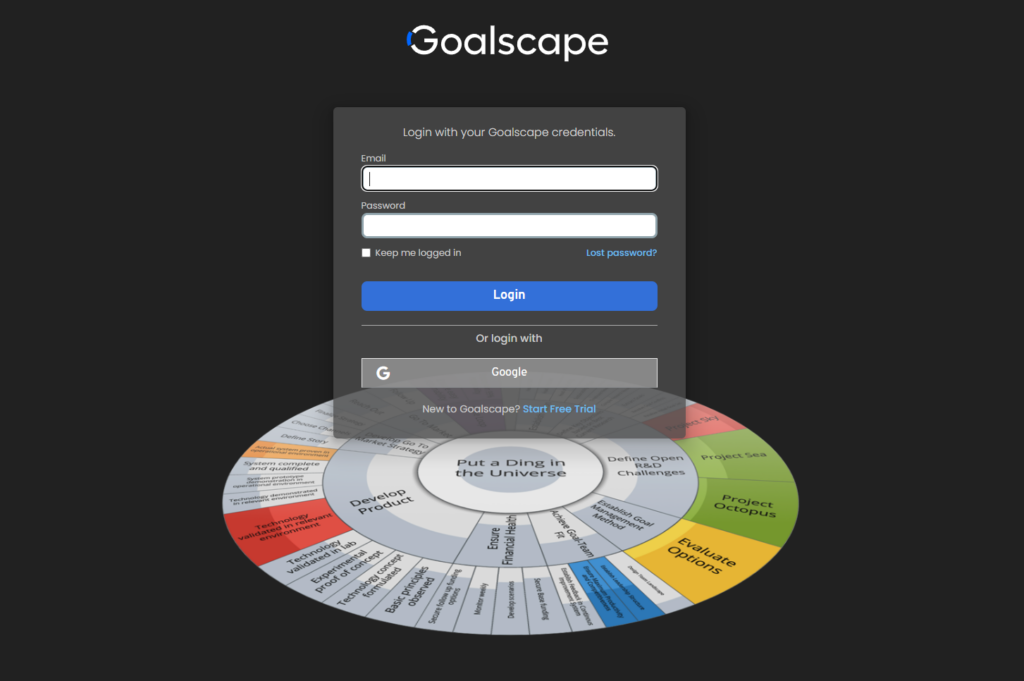 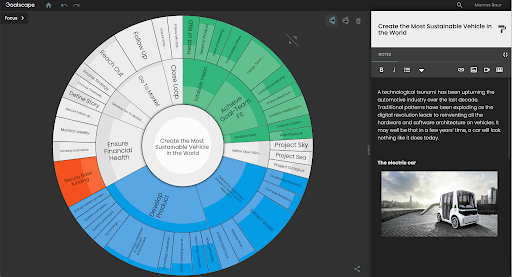